The view below is from Cowrock Mountain, 36.2 miles from Springer.

On the sixth day, I hiked past my friends by accident because of a miscommunication. They opted for a shelter that was over a mile off trail and downhill. I came to the cutoff for the shelter and realized I wasn’t sure if they were there or not, and decided I’d rather hike more miles on trail than waste miles off. It turned out to be a good decision since they had a climb out and a longer next day as a result. I was so tired when I came into Low Gap that I just skipped dinner and went directly to sleep. It was my lowest morale moment on the trail so far and I was lonely, slept badly, and missed my friends.

Taylor, trailname “On Star,” showed up the next morning and my hope was renewed that I was in contact with my friends again. We all hiked (separately, since I am slow) to Blue Mountain Shelter. It was a long day for them, but a moderate day for me.

Below is the sunrise view from Blue Mountain Shelter around 7:30am on Day 8.

This day was fairly hard with some difficult climbs, especially up Tray Mountain. I used my umbrella as much as I could to protect against the sun, but the wind was also strong that day. I began to enjoy taking pictures of my shadow, since they seemed to capture a side of my life on the trail (and off) that felt otherworldly, significantly solo. 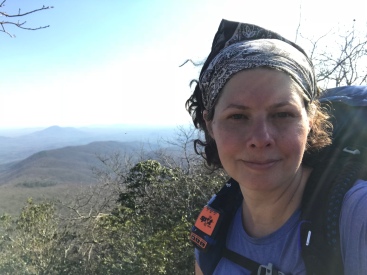 When I reached camp, everyone else was set up already. As soon as the sun went down, the wind began to howl and whip everyone’s tent or hammock wildly. I spent most of the night praying I wouldn’t be swept away. Everyone had dust in their gear the next morning.

Because of my umbrella, I earned the trail name “Mary Poppins,” which I accepted in lieu of something worse. My friends had been calling me “Rogue” because of my digging tool I carried, but it didn’t exactly fit. The umbrella was for the sun mostly, and the flowers are evidence of the burgeoning spring. 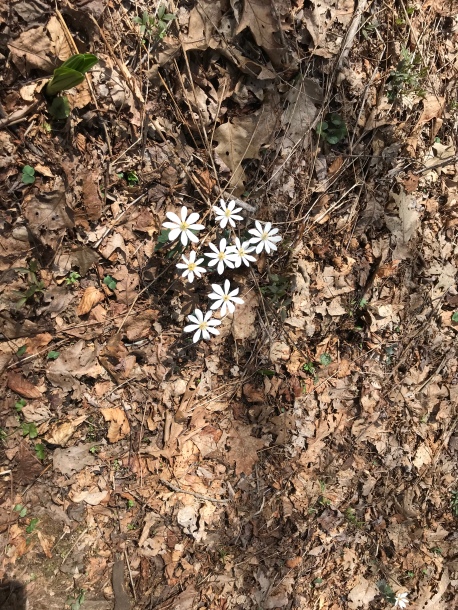 This day was a hike out, so we were gratefully headed to town for restock and rest. Bad weather was moving in, so this was also our chance to avoid potential rain, storms, and snow. 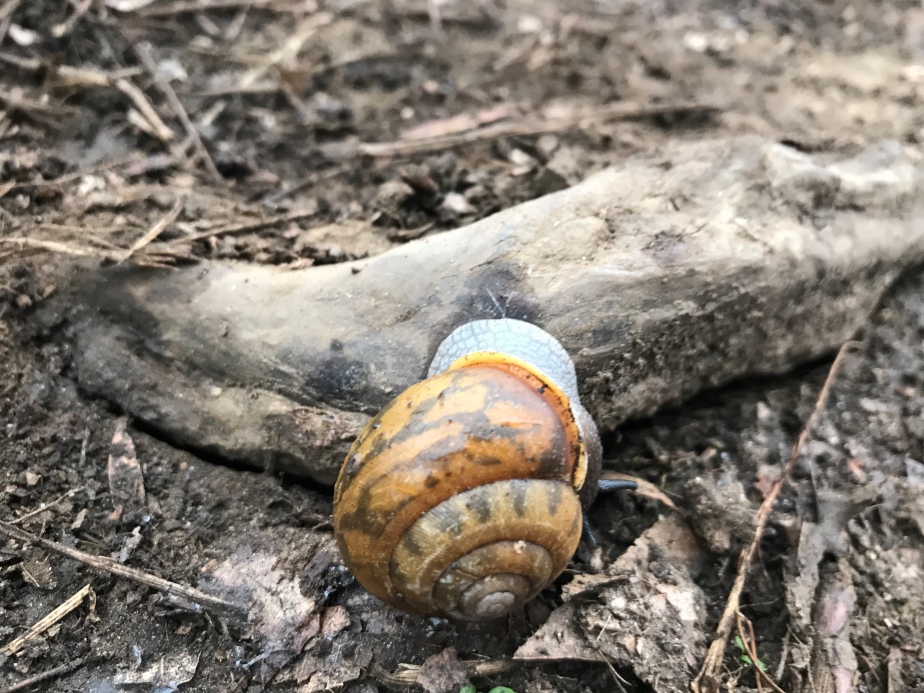 A snail I happened to see while coming off the mountain.

We opted for the touristy Bavarian town of Helen, Georgia over the nearby Hiawassee, largely because we had heard it was hard to find a room. It turned out that Helen was an ideal place to recuperate with fine German food and atmosphere. Oddly enough, there was also a Cabbage Patch Doll Convention in nearby Cleveland, GA, so many of the rooms in our hotel were filled with Cabbage Patch Kids and their enthusiasts. 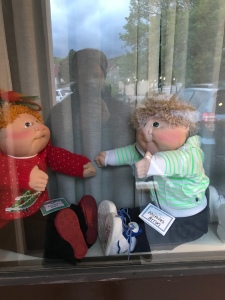 The clown had to be the strangest I’d seen . . . nightmare material.

We had dined upstairs at Old Heidelberg under the yellow umbrellas. 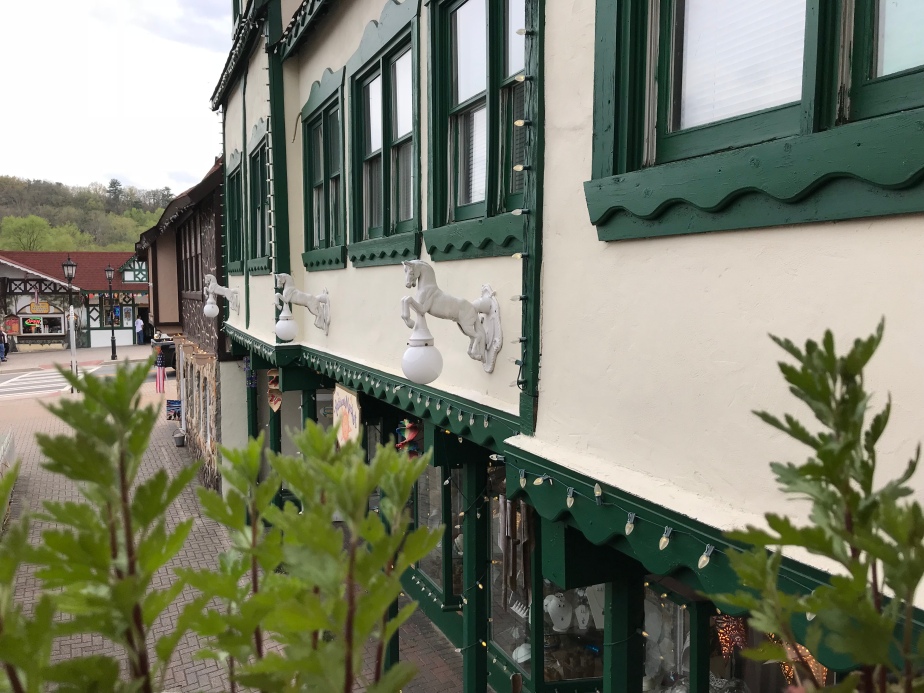 Below, the “Troll Tavern” can be seen below the bridge. Really a fun town with some interesting spaces. 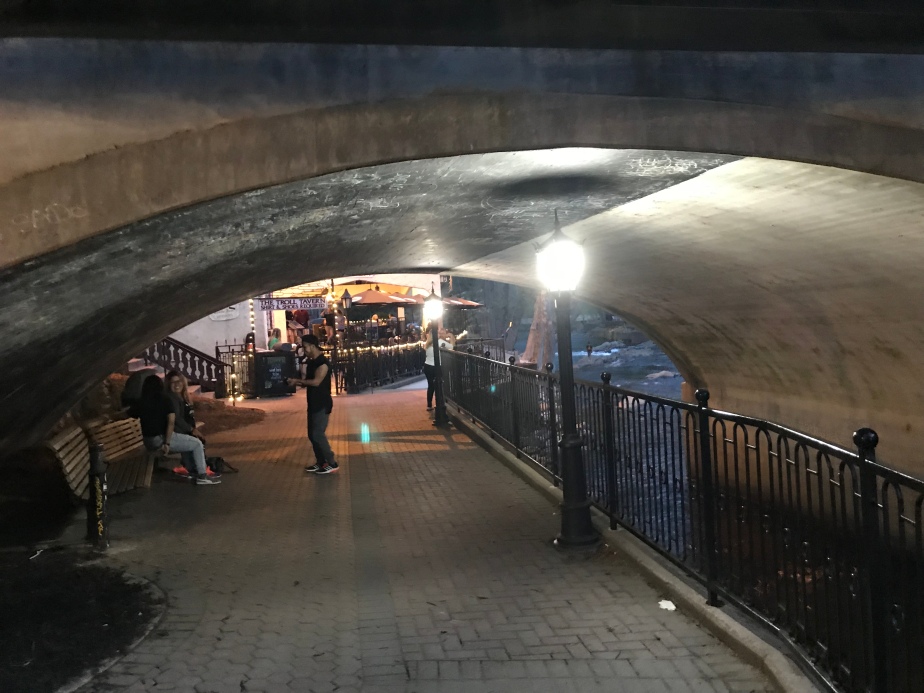 Flowers were some of the most beautiful I’ve seen.

(Glad it was a zero day because the German beer was a bit much on my stomach which had only enjoyed trail food and water up until that point!)