This fielding is only for two days because they are a landmark for me in terms of the social aspect of the trail. Even though I had begun as a solo hiker, I had met up with three other hikers who were, for the first ten days of my hike, people I could count on to camp with and to share rides into town with.

The AT hiking bubble is constantly evolving as people come on and go off the trail. In the photo below, a man and woman (to the right) set up a grill and cook hamburgers and hot dogs for hungry hikers. (This is called “Trail Magic” when people help hikers by feeding them or transporting them for free.)

But more significantly, this photo captures some of the people who had stopped at Dick’s Creek Gap on April 14 who were also coming off the trail that day. On the far left is “Ron Rico Suave,” one of my hiking friends. I don’t know the guy in the black sweatshirt. The girl with the grey head wrap is “Low Gear,” whom I’d later enjoy hiking with, and share a room in Franklin with. The blonde girl in black is “On Star,” who was the most organized hiker among us and who always knew where we were (hence her name.)

“Ron Rico Suave,” along with “On Star” and “The Finder” had always hiked faster than me, so often they would make it to camp an hour before and be set up by the time I arrived. On our first day back on the trail from Helen, Georgia, they all agreed they were trying to make miles, and I had a feeling that meant we were about to separate.

Here’s The Finder (left) and On Star (right) in the back of the van we traveled in to the Top of Georgia Hostel, where On Star had a restock package waiting for her. We all walked up to rejoin the trail which was a half mile away. From that point on, they hiked forward and I took my old sweet time.

The hike this day was especially cold and windy. The trees were coated in snow and ice which made for beautiful scenery. 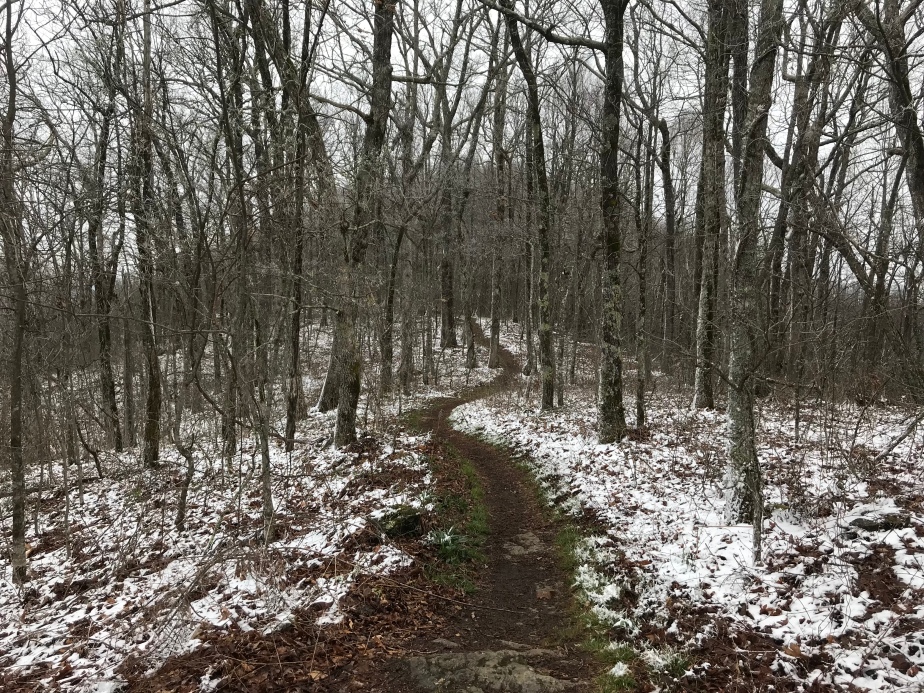 The shelter that night was startlingly cold, probably somewhere in the 20s. If it had not been for the fire, I would have shivered all night. We all opted to sleep inside the shelter, though in hindsight, I would have preferred the nominal warmth of a windless tent.

The next day was slightly warmer, although the remnants of ice (that had fallen from the trees that morning) were everywhere to be seen. Because I hiked more slowly than others, I was mercifully spared the pelting that others received as a result of the ice falling from the warming trees.

The part of the story that you aren’t getting is how I came to hike my longest day so far. My friends and I had agreed to hike to Muskrat Creek Shelter and stay for the night, but when I arrived, I realized they had hiked on.

It had been a gorgeous day for hiking and I just imagined that they had arrived at Muskrat Creek Shelter (nothing to write home about) and had decided to make the most of good weather and hike on. I did the same, but pushed myself beyond my comfort.

I arrived at Standing Indian Shelter late with the encouragement of a hiker named Overkill who was moving at the same pace I was. He got his name because he had started his hike with upwards of 80 lbs in his pack. He carried a shower (!) along with other things most thru-hikers abandon days into their hikes.

My friends looked at me piteously when I rolled in, and I don’t think I ate dinner, just set up camp and went to bed. The next morning I decided that if they hiked on again it was for the best, since I didn’t want to keep them from making it to Maine. I had already accepted that I wasn’t going to have time to make it that far, so I did not want to hold anyone back.